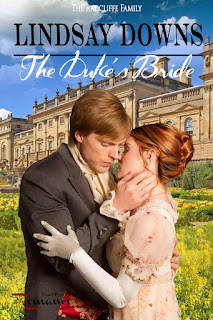 The Duke’s Bride
Book 1 in The Radcliffe Family series

Blurb:
Who murdered his father and why does someone want him dead?
These questions torment Simon, The Duke of Kettering.
Even his mother has no idea.
Add to this problem, Simon’s desire for Lady Emma Carringham, the duchess’ companion, is growing daily.
Over time he knows she will make the perfect duchess for him.
That is, if he can keep her alive, himself also, for that matter.
Even letters saved by the late duke are of little help.
It’s not until Emma’s mother, Lady Sarah, arrives do all the pieces slowly come together.
They learn the late duke had gotten a young lady with child, a son. Later, the young man returned to France and fought with Bonaparte in Spain
Simon’s next question- Why now?
To that, no one had an answer.
At least now, thanks to Lady Sarah, they had a name-Justin Beaumont- to go along with a partial description of the man.
When Simon learns the man has left the district he relaxes the need for guards as his extended family descends upon the ducal estate for the impending wedding.
This decision proved unfortunate for his betrothed who, with her maid, footman and groom, visits the dress shop for a fitting of a specially made gown.
When Simon receives a note he knows to save Emma from the madman he will have to risk his life.
Safely returned to the ducal palace Simon can’t wait another second longer to marry Emma and does so with a newly acquired special license.

“I don’t know who you are. This is the private office of The Duke of Kettering. I order you to leave at once or I will be required to call for footmen to forcibly remove you.” The woman stood in the doorway, her eyes dazzling, her cheeks crimson in rage, and a stern tilt to her chin.

He bit back a smile. Did she think with her short stature that she would be taken seriously? Simon tightened his grip on the edge of the desk until his knuckles ached. He started to open his mouth to explain, and chastise her for interrupting him with her silliness until, she stepped over to the saber on the wall and drew the sword from its scabbard.

If this woman was his mother’s companion there was no question in his mind, she was insane.

He bolted out of the chair so fast it knocked against the wall. Simon rushed to the woman, stopping a few feet from her, a safe distance from the saber. She held the deadly sharp blade in her hand, pointed directly at his chest.

“I don’t believe a cavalry saber is the proper accessory for a young lady. Why don’t you relinquish it before one of us gets seriously injured?” He smiled, belying the tension in his gut.

“Not until you’re in a cell in the basement, awaiting whatever punishment His Grace deems suitable,” she snapped back, not even a sliver of fear in her eye or voice.

Simon appreciated the fact this young lady wasn’t a weak flower, but a strong tree. Unwilling to bend in a storm.

“Lady Emma, it is my great displeasure to present to you Simon, The Duke of Kettering.” His mother announced from the doorway.

Simon watched as the young woman’s cheeks flushed in a delicate pink. It took her three seconds to realize what she’d done, and she lowered the saber to her side. “I-I…” Her voice trembled.

He stared, wondering why there was an unexplainable ache in his body similar to the time he’d hit puberty and realized just how pretty women were, but this was different, somehow.

Clearing his throat, he stepped forward, composing himself. “If you don’t mind, I’ll relieve you of this.” He held out his hand and without hesitation, she placed the saber in his palm. He closed his fingers around the handle enjoying its warmth from her touch.

Returning the blade safely to the scabbard, he turned back to Emma who gave him a deep curtsey.

And then he did something without thinking of the consequences.

He gently cupped her elbow, straightened her, then led her further into the room. Much to his wonderment, his mother followed, frowning.

“Your Grace, please accept my humble apology for threatening you and holding you at the end of a blade.”

“There’s no need for an apology as I’m as much to blame as you are for failing to inform you who I was when we first met.”

“I agree. I feel as if I was at a serious disadvantage,” Emma mumbled.

“If you both have your wits about you—” the duchess said, “—which I doubt you do Simon, shall we retire to my parlor? We can discuss something which has not only concerned myself, but Emma as well, for the longest of time.” 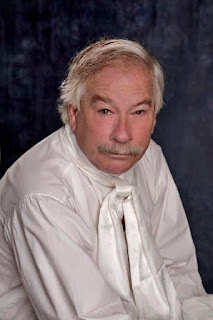 I’ve been an avid reader ever since I was old enough to hold a red leather bound first edition copy of Sir Walter Scott’s The Lady of the Lake in my lap.
So it only seemed natural at some point in my life I take up pen and paper to start writing. Over time my skills slightly improved which I attribute to my English teachers.
My breakthrough came about in the mid 1970’s when I read a historical romance written by Sergeanne Golon, Angelique. This French husband and wife team opened my eyes to the real world of fiction. Stories about romance, beautiful damsels, handsome heroes and plots which kept me hooked. Of course, being a man, I had to keep my reading hidden from others as that wasn’t appropriate reading for men.
With this new found appreciation of the written word I took up other books and devoured them as a starving person would a plate of food. I them attempted to write again. I still wasn’t satisfied so I put it aside for years as other events entered my life.
Finally, in the early years of the new millennium I tried again to write and once again met with limited success. At least now I was able to get past the first page or two. Then, in 2006 a life changing event brought me back to my love, I took a job as a security officer. This allowed me plenty of time to read different genres.
My favourite was regency. As I poured through everyone I could get my hands on I knew this could be something I wanted to attempt.
Since 2012 when my debut regency romantic suspense released I was hooked and have, except for a few contemporaries, focused on this genre.
Since 2012 I’ve lived in central Texas. I’m also a member of Romance Writers of America and their local chapter.