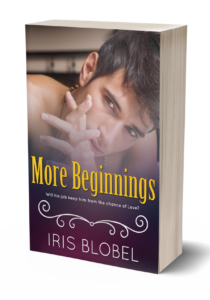 Zach Taylor, an escort in Sydney, living in Hobart, enlists the help of Natasha Peterson when his teenage friend, Mia, runs away. He soon finds out that the ‘dragon’ is really more of a kitten. And although Natasha, Mia’s teacher, is attracted to him as well, she has her own problems to deal with, not to mention her initial reaction to Zach’s occupation.

Will Zach’s job keep him from a chance to be with Natasha?

Life is good for teenager Mia Levesque. But when Darren Schuster shows up in Hobart, she knows something is up once Sophie and Mark cut their weekend away short and rush home in the middle of the night. When Sophie won’t answer Mia’s questions, emotions run high, and Zach confirms Darren’s identity to Mia. Disappointed, angry, and feeling alone, Mia runs away.

Will life settle back into a routine for Mia once she finds out about the stranger in her life?

New Beginnings have given the Levesque girls a new start in life, will More Beginnings be another chance for them?

Zach Taylor’s young neighbour, Mia, let out a long sigh as she joined him on his front porch and sat next to him on the swing. Enjoying a cool lemonade, he invited her to grab a soft drink from the fridge as well. It was a warm summer day, and the air showed no sign of cooling down. A lot of people in Hobart were weary of the unusual hot spell for the very southern Australian city.
With another hefty sigh, Mia raked through her long, blond hair and stared into the distance. “Honestly, Zach, she’s a dragon. I’m sure she does it on purpose. She doesn’t like me. She thinks I’m spoilt.”
The dragon in question was Miss Peterson, Mia’s high school English teacher. There was no doubt that Mia liked school, and she enjoyed her classes. And even though English wasn’t her worst subject, it certainly was the toughest one, with Miss Peterson piling on homework one after the other.
Zach took a sip of his drink before he replied, “Hey, pumpkin, settle down. What’s that supposed to mean you’re ‘spoilt’?”
She lifted her shoulder in a slight shrug. “You know!”
Raising his brows, he replied, “Actually I don’t know! Isn’t she Sophie’s good friend?”
Another shrug. “Kind of, I suppose. They used to do the boxing stuff together, and since Soph’s carrying a baby, they go and enjoy coffee and cake instead every once in a while.”
Ignoring his chuckle, she went inside and helped herself to cold lemonade. She opened the can with a simple click as she returned outside and took a long sip.

Iris Blobel was born and raised in Germany and only immigrated to Australia in the late 1990s. Having had the travel bug most of her life, Iris spent quite some time living in Scotland, London as well as Canada where she met her husband. Her love for putting her stories onto paper has only emerged recently, but now her laptop is a constant companion.
Iris resides west of Melbourne with her husband and her two beautiful daughters.
Next to her job at a private school, she also presents a German Program at the local Community Radio.