~The Rake's Challenge~ on Books Revisited.

WHAT DOES IT TAKE TO CHALLENGE A RAKE? 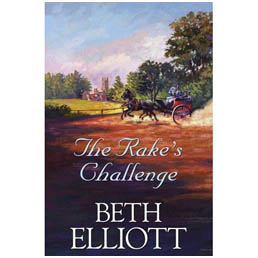 Giles and Anna
Another day, another duel for Giles Maltravers, Earl of Longwood. London’s worst rake lives up to his scandalous reputation, but admits to his close friend Ned that it’s all getting wearisome. Then his father, the duke, orders him to reform and marry. Giles responds by driving out of town in search of fresh adventures. But when he sees a young lady being molested by a couple of drunken gentlemen, he rescues her.
Shaken by her narrow escape, Annabelle Lawrence reluctantly accepts help from Giles. When she declares she is setting off on a life of adventure, he recognises a kindred spirit and escorts her to her destination. A month later, they meet again in Brighton. But the agreeable summer holiday nearly goes horribly wrong when the Prince Regent is the target of a sinister plot, involving Anna. Giles has to rescue her yet again. He comes to realise that looking after her makes life more worthwhile, but of course, the path of true love does not run smooth.

What inspired this story?
I was flicking through a glossy magazine and suddenly, there was Giles, staring at me in a most arrogant and bored manner. His dark hair tumbled over his forehead, his pose radiated energy and impatience. As I gazed back, scenes of his life appeared in my mind. All I had to do was to work out which order they came in, and to find him some reason to channel his energy in a positive way. Add into this that my lifelong French friend had recently complained that in every story, all my villains were French, so I knew that had to change. And to complete the mix, my heroine is a devoted fan of Lord Byron’s poems and wants to model her life on the adventures of Childe Harold.

EXCERPT
He leaned forward and looked directly into her eyes. 'That was said in a very serious tone. What are you fleeing from, my child?'
Suddenly, there was a lump in her throat. She wanted him to put a strong arm round her, so she could lean against his shoulder and sob away all the hurt and frustration of being an unwanted stranger in her own home. She swallowed hard several times and at last managed to say, 'My mother kept me away at school until I was nineteen. And almost as soon as I came home, she had a suitor arranged for me.'
'Was that so terrible?' he asked, 'It’s the usual way of our world.'
'Yes, but he’s so old,' she exclaimed, 'at least thirty-five!'
'Ah!' he said faintly, 'my infant, I myself am thirty years of age. I shall need a cane any day now.'
She gave a shaky laugh. 'I cannot believe that, sir. Why, there is no comparison between you and cousin Frederick. He’s bald and stooping and…and he’s a parson and very conscious of his moral superiority.'
'Oh, I have no moral superiority,' he murmured, 'no moral anything, in fact.'
'Well, I’m sure you would not come running only because it was suggested you could marry an heiress, sir.'
The horses broke into a gallop. Giles muttered something under his breath and gripped the reins, slowing them to a canter. He gave a heavy sigh. 'Miss Lawrence, just what am I doing, helping you to disappear in such a way?'
Anna gave a gasp of horror. Her cheeks went white with apprehension. One shaking hand flew up to her throat. But before she could speak he went on, 'If I were a man of honour, I should undoubtedly insist on returning you to your family forthwith. But…' he shook his head, 'I do sympathise with your point of view. You see, I’m fleeing from my family also.'
She frowned over that. 'But you’re a man. You can do as you like.'
He gave a short laugh. 'Alas, not always. However, I do my best. Which is why my reputation is so bad. You do realise you must not admit to knowing me.'
'I will not be so base,' said Anna hotly. 'You are most truly a gentleman.'
He shook his head. There was a strange, twisted smile on his lips.
A short while later they were driving past high walls and soon came to a set of imposing entrance gates. The woman at the lodge confirmed that it was indeed Rosevale Court and Giles turned into the avenue. Anna surveyed the large building in silence, her hands pressed against her throat.
'I do trust you will be well treated here.' Giles swept the curricle round the circular drive and pulled up in front of the main door. Morgan leapt down to take her portmanteau. Giles helped her down without leaving his seat. Anna clung to his hand, the last bit of solid comfort in her uncertain new world.
'Thank you…for everything…' she whispered. She had to blink hard to see his face clearly.
His gloved hand briefly touched her cheek. His green eyes were glinting at her. 'Courage, little Anna. This is your first big adventure.'
The butler was standing in front of the open door. Morgan climbed back into the curricle. Giles touched his whip to his hat, gathered up the reins and then the curricle swung away. Anna took a deep breath and turned to walk through the door into her new life.

Review Ms Elliott knows how to write just the kind of Regency romance I enjoy. This is a story where two people really do get to know - and like - each other and it is full of enjoyable moments. This is a relaxing, sunny treat of a novel with much to recommend it for fans of writers like Georgette Heyer. Rachel A Hyde at Myshelf.Com


You can purchase The Rake’s Challenge here: http://tinyurl.com/j64yvrf
And I’m very proud that the cover was designed by talented artist David Young.