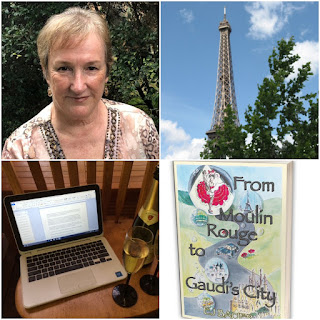 I write as EJ Bauer

About 4 years ago, a short travel story I wrote won a monthly prize in my memoirs group We Love Memoirs. As I’ve always wanted to write, this was so encouraging and I decided to scribble a little more. I wrote about 7,000 words on my adventures in the south of France (think driving on the ‘wrong’ side of the road and speaking atrocious French). My work found its way to an editor at Ant Press and I was bowled over when I was offered a contract. That was the beginning of much hard work, edits and rewrites. Eventually my travel memoir From Moulin Rouge to Gaudi’s City was published, book one in my Someday Travels series.

I live in Australia on the beautiful south coast of NSW. I'm happily married, retired, mother of 2, grandmother of 5 and servant to a gorgeous tortoiseshell cat, Lucy. Travel and writing are now a major part of my life. I heartily endorse the saying 'Seize the Day' and view much of life as a glass half full - of champagne that is!

Yes I have a work in progress. The next book in my From Moulin Rouge to Gaudi’s City will be about Spain and Portugal in my Someday Travels series. 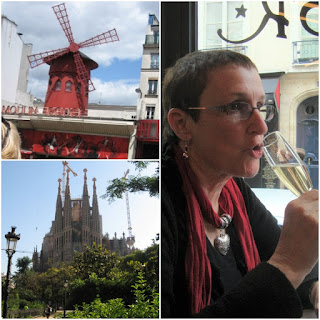 My book, From Moulin Rouge to Gaudi’s City follows the adventures of three ladies of a certain age as they set out on a trip to France and several days in Barcelona. There follows a series of adventures, many glasses of champagne and some amazing destinations.
When Elizabeth receives a diagnosis of breast cancer, she reassesses her life’s to-do list. Having always suppressed her travel longings, she opens her neglected 'someday' ledger and takes a much closer look at the contents. After an opportune invitation from a friend to meet in Paris, and her sister’s enthusiastic agreement to be part of the adventure, a plan begins to take shape. Join the Australian trio as they savour the sights of France and Spain, where no trip is complete without a morsel of local cuisine and a sip of something sparkling.
From Moulin Rouge to Gaudi’s City is available at :-

I can be contacted here:
https://www.facebook.com/ejbauerauthor/