The Cover for The Brat 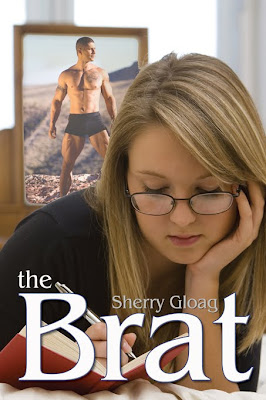 Thanks to cover artist, Angela Anderson,

I have just received the best end of season surprise gift...

The cover for my new book!

Why the Scots celebrate Hogmanay

From the late 17th century until the 1950's, the Kirk in Scotland, due to the Protestant Reformation, banned the festival of Christmas; dismissing it as nothing more than a Popish or Catholic Feast. During that time Scots were expected to carry on working as usual.  So they celebrated their winter solstice at the start of the New Year.  This was a time when family and friends gathered to party and exchange gifts, and was a special time for the children.

There are many accredited sources for the derivation of the word Hogmany.  In Scandinavian the word for the feast preceding Yule was "Hoggo-nott",  The Flemish "hoog min dag"  means "great love day".  The Anglo-Saxon, Haleg monath, is another candidate for the dervation of Hogmanay, meaning 'Holy Month'.  The French. "Homme est né" or "Man is born" heads the list of possible origins.  Wherever the true source lies, the Scots have learned to maximise the reinstatement of the Christams festivities in the last sixty years or so, running them into their traditional Hogmanay holiday.

These traditions include 'sweeping out the old to make way for the new'.  Housewifes would clean their home thoroughly on the last day of the year, including the ashes from every grate in the house.  Ever the 'Canny' Scott, all debts would be cleared before the midnight bells rang in the New Year.

First Footing is a long-held practice and promised good fortune and wealth to any holdhold who welcomed a dark-haired male as their first footer/visitor of theNew Year into their homes.  The symbolic First Footing Gifts of coal and salt have given way to whiskey and shortbread!

Why were dark haired visitors  welcomed and blonds feared?  It is believed to date back to the times of  the Viking Raiders, when a blond on your doorstep usually spelled trouble.

Today Hogmanay is still widely celebrated in Scotland.  Commonly firework displays and bonfires are enjoyed but other, older traditions still prevail, such as rolling blazing tar barrels down a hill and tossing torches. The smoking stick was also known as a Hogmanay.

Some original customs are still practiced in older communities such as the Outer Hebredes, Stonehaven, and many outlaying Scottish communities.

If you fancy experiencing Hogmany celebrations for yourself, a quick search online for Hogmany will reveal the many oportunies to fulfill your dream.

I wasn't sure where to start with today's blog, and kept thinking about yet another new experience.  Editing! The prospect seems overwhelming!! LOL Yes, I've edited my writing before, and thought I'd done an 'O.K' job on it.  But now I'm in the realms of the professionals, and everything changes.  The bar is raised and another learning curve looms.  And from nowhere, the song title You'll Never Walk Alone, popped into my head.  It seems so appropriate right now too.

When you walk through a storm

Hold your head up high

And don't be afraid of the dark.

At the end of a storm is a golden sky

And the sweet silver song of a lark.

Walk on through the wind,

Walk on through the rain,

Tho' your dreams be tossed and blown.

Walk on, walk on with hope in your heart

Recently I responded to Phyllis Cambell's post about her new book release, and back she came with the comment  "I won't even tell you how many times I've revised this particular story (my Dec. release) because it'll make your head spin. lol"  She's talking about her newly released book 'Belong to Me'

Learning Curves and other Treasures

On her blog Rebecca Clark writes "...the problem is embracing this new identity, this great, dream-come-true identity that I have longed for since a child. And suddenly I’m afraid to step out into the light and admit what I am. An author. A writer. A creative person. "  And, oh, how I can empathise with this.
Before reading Rebbeca's post, I assumed to feel like that made me a wimp, then I discovered Rebecca's post and isn't hind-sight a wonderful thing?  I didn't feel so isolated, I remembered Sussan Jeffers Feel the Fear and Do It Anyway, and that's back on my TRL.
This whole blogging experience is new to me and a huge step out of the shadows, and in the last week, I have been overwhelmed by the magnitude of the vastness of networking.  I also feel excited, temulous, adventurish, and more than a touch timid about the whole thing.
The biggest treasures so far, is coming across a wealth of new and potential friends who are already treading the path I am about to set out on.
at 11:49 4 comments:

When, earlier this year, LASR accepted my short story Precious Treasures I thought I'd fly as high as I could go.  When they accepted three more I thought 'It can't get better than this.'
But earlier this week, when TWRP accepted my full length story, The Brat,  I couldn't speak about it incase I woke up and discovered I dreamt it!!

Now?  Well now I'm shouting it to the rooftops, starting here.  And does it feel good?  Yeah!!!!

And I'd like to thank, Mel, Judy, Lauren, Kristy, Judith, Pepper and Nik, who have all shared my journey.
at 22:13 No comments: