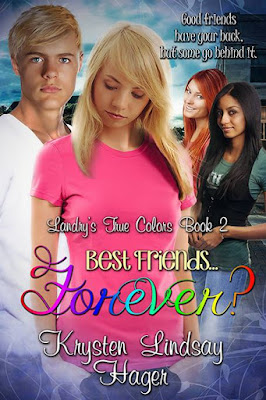 Best Friends…Forever? (Landry’s True Colors Series) by Krysten Lindsay Hager
Landry Albright hopes the new year will start off in an amazing way—instead she has to deal with more frenemy issues, boy drama, and having most of her best friends make the cheerleading squad without her. Suddenly, it seems like all anyone can talk about is starting high school next year—something she finds terrifying.
Landry gets her first boyfriend, but then gets dumped just as things come to a head with her friends. She feels lost and left out, but finds good advice about dealing with frenemies from what she considers an unlikely source. Landry learns to speak up for what’s right, tell the truth (even when it hurts), and how to get past the fear of failure as she gets another shot at competing in the American Ingénue reality show modeling competition.
Book Beginning:
There was nothing like spending Christmas in Chicago. The city was so sparkly and bright when it was all lit up and decorated for the holidays. It was so exciting to see all the cars and taxis whizzing by and feeling like anything was possible in the big city. I loved getting off the train, seeing my dad, and taking the taxi back to the apartment my parents and I lived in together until my mom got transferred to Grand Rapids. I liked my new school and all, but I missed my dad living with us and hoped he’d be able to find a job in Michigan and move in with Mom and me.
The Friday 56 (From page 56):
“Thanks, it — it means a lot to me that you’d come see me play,” he said, his eyes locked on mine. They were so warm, and it felt like my smile was radiating through my whole body.
“Any time.”
“I have to go out with the team tonight,” he said, glancing behind him. “But I’ll talk to you later, okay?”
He walked over to his teammates. Then he turned around and winked at me.
“He totally likes you,” Peyton said.
I nodded. It felt amazing that he seemed to truly appreciate that I had been there, but I couldn’t shake the thought of how Devon would feel if she learned her crush didn’t feel the same way about her. 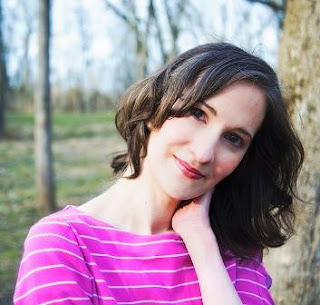 Who knew all those embarrassing, cringe-y moments in middle school and high school could turn into a career? And who would have thought that daydreaming in math class would pay off down the road?
Krysten Lindsay Hager writes about friendship, self-esteem, fitting in, frenemies, crushes, fame, first loves, and values.
She is the author of True Colors, Best Friends...Forever?, Next Door to a Star, Landry in Like, Competing with the Star, Dating the It Guy, and Can Dreams Come True. True Colors, won the Readers Favorite award for best preteen book and the Dayton Book Expo Bestseller Award for children/teens. Competing with the Star is a Readers' Favorite Book Award Finalist. Landry in Like is a Literary Classics Gold Medal recipient. Krysten's work has been featured in USA Today, The Flint Journal, the Grand Haven Tribune, the Beavercreek Current, the Bellbrook Times, Springfield News-Sun, Grand Blanc View, Dayton Daily News and on Living Dayton.