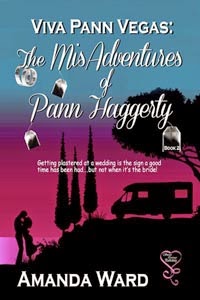 OPENING PARAGRAPH
If there was one thing that Pann Haggerty could do well, it was multitasking. So long as she didn’t concentrate on one task, it was doable. Unfortunately when she put her mind to something, it all went the opposite way of her boobs, namely tits up!
Page 56
Pann stroked Fred rhythmically. She really was being a total bitch to him. It was all too difficult to take in. Married, broken leg, niffy mog, new van, and take charge Joe. Nothing seemed relaxed or fun anymore. How on earth was she going to have fun with her leg in plaster? Maybe she should take up knitting or crocheting. After all, she was going to be a grandmother in a matter of months and now had the Zimmer frame and dratted commode to prove it. What was next, the menopause? Or if it translated over to the men’s case, meno-stop? Fred chirruped, as Pann found a particular spot behind his ear, and leaned into her fingers. The pain-killers must be working to create these sorts of strange thoughts, including the song that the Cheshire cat sang in Alice in Wonderland.
“'Twas brillig, and the slithy toves. Did gyre and gimble in the wabe; All mimsy were the borogoves. And the mome raths outgrabe.” Pann sang the children’s nonsense rhyme quietly to herself. Her brain seemed the consistency of one of those ready-made faggots in gravy she used to eat as a kid. Pliable and squadgy. She sang the verse over and over again, in an attempt to help her off to sleep. Eventually, her eyes drifted shut, and with the soft silk of Fred’s fur under her fingertips, Pann fell asleep.
BUY LINK: Amazon
Website: www.mrsajward.weebly.com