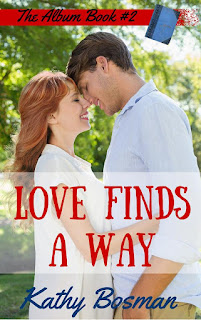 Blurb:
When Ella hands over The Album to Pauline, the young food blogger is about to embark on an adventure of a lifetime—she’s been chosen as a contestant in The Culinary Dream, a TV cooking competition. Pauline takes The Album with her to Italy where the filming is to take place and meets food photographer, Xaden, the brother of the man who ripped out her heart and put her off relationships for a long time.
To her dismay, she gets eliminated from the competition on the first round. Humiliated and determined not to be pitied by her friends and family, she decides to stay behind in Italy for a holiday as well as blog about her restaurant experiences in the exotic European country.
Xaden won't leave her alone and proves to be a friend in a time of need but when he kisses her, she pushes him away, afraid he’ll hurt her like his brother did. The TV series offers her a job as the editor of the food magazine and she is to work alongside the very man she wishes to avoid. Forced to be with the man she can't resist but whom her instincts tell her she can't trust, Pauline is in for an emotional roller-coaster ride with The Album as her companion and guide.
Excerpt 1
Five taxis awaited them outside. She bit her lip, certain the crew would take their own taxi, but Caren ferried them to disperse and “get to know one another.”
Much to her distress, Xaden followed her and plonked himself right next to her in the taxi. Once the vehicle chugged out the airport, he placed his camera down at his side, took her hand, shook it roughly, and grinned. “Xaden Zander. And you?”
Zander.
Her mind frantically tried to place the very familiar surname while he stared at her, his face only a foot from hers, so smooth, so confident, and so easy-going. Tingles ran up her arm and she didn’t hold her suitcase with The Album. No magic this time. Pure, breath-robbing attraction.
“Zander. Um…Zander. Are you? You can’t be…?” Icy showers cascaded over her in one heart-rending second. Roan’s brother did have an unusual name. He’d mentioned him at times.
Xaden is Roan’s brother?
“I’m…?” Once again, he seemed amused at her expense.
“You’re Roan’s brother, aren’t you?”
He narrowed his eyes at her, the first sign of any emotion except for upbeat and exuberant. “I prefer not to be judged through the eyes of any woman who’s come into contact with Roan.”
Oh, so he was aware of his brother’s sins?
“It’s hard not to…” His dark eyes became black holes. “…well, you do resemble him, come to think of it.”
Could explain the immediate attraction. Why couldn’t she get away from Roan and the memories he’d branded on her brain? Other women had many partners and got over them all. She’d slept with one guy who messed her around and she still drowned in the raging waters of his indiscretions.
Xaden gave off such a big presence. It filled the taxi, making the driver and the other contestant seated in front seem like an insipid spice that didn’t change anything about the taste of the meal. Xaden, instead, was the garlic, the onions, the bacon, or the rosemary.
But no, he measured up to ghost pepper in danger and heat level. Anyone only vaguely related to Roan should never touch her, even her knee or her back, but never, ever, her heart. She remained way too vulnerable for the likes of them.
You've read the blurb, scrutinised the excerpt, now click on the link to enter Kathy's rafflecopter giveaway...

Author Bio:
Kathy lives in South Africa, where the summers are hot, the winters cool and bugs thrive. She writes romance in many forms, most of the time with women who feel deeply, men who care strongly and characters who learn lessons along the way. Every so often, she sprinkles a little magic in her stories. When she’s not writing, she makes sure her kids work hard as they do school at home, tries not to get too distracted by dust bunnies and cooks up a storm to keep the tummies full. When she’s not hectically busy, she loves reading romance and fantasy novels, watching movies, and dabbling in different crafty things, depending on her mood.
Buy Links:
Amazon: http://www.amazon.com/Love-Finds-Way-Paulines-Story-ebook/dp/B01BNMW1B4
Smashwords: https://www.smashwords.com/books/view/614697
Kobo Books: https://store.kobobooks.com/en-us/ebook/love-finds-a-way-2
Barnes and Noble: http://www.barnesandnoble.com/w/love-finds-a-way-kathy-bosman/1123406511?ean=2940152623901
Online Links for Kathy:
Website and blog: http://www.kathybosman.com/
Facebook author page: http://www.facebook.com/KathleenBosman
Twitter: https://twitter.com/KathleenLBosman
Goodreads: https://www.goodreads.com/author/show/5257900.Kathy_Bosman
Pinterest: http://www.pinterest.com/gracewalk17
Amazon: http://www.amazon.com/Kathy-Bosman/e/B007GCQBNK
YouTube: https://www.youtube.com/channel/UCxifimh0X62uZLvKkon8tDQ
Newsletter Subscription: http://eepurl.com/NokET
Authorgraph: https://www.authorgraph.com/authors/KathleenLBosman
at 06:30 No comments: