Alas, Valentine's day has come and gone, and accident prone, amibitious Cupids have no place here for another year :-( So today I am going to share a Sunday Snippet from my current WIP. The Magpie Chronicles and other Stories.
This week's six just happens to come from one of the 'other stories'! LOL 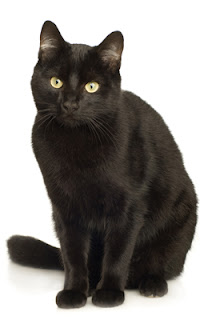 Not everyone believes a black cat is lucky. Now where did that thought come from, Jim wondered, scoffing at the thought he could almost hear the voice in his head.
A vague memory of a friend’s serious voice going on about his American friend’s unhealthy obsession with the belief black cats were unlucky and wouldn’t go anywhere near one, and refused to allow his children to bring a black cat home from the sanctuary. And what about the Germans? Why was he even giving these thoughts headroom, Jim wondered, and thumped his hand on the steering wheel as a snazzy white sports car shot past him and vanished round a sharp bend in the road.
Automatically he reduced his speed, unsurprised when he rounded the corner to find the sports car, its roof sheared off, stuck beneath a long trailer being pulled by a farm tractor.
Please visit Snippet Sunday to read more great snippets
at 10:58

First, as a fan of black cats, I quite enjoyed the start of your snippet. The end disturbed me, mostly because I know a few people who have been in similar accidents.

You're writing in this snippet is very vivid.

I like the premonition of bad luck---though the accident certainly surprised me!

I loved the opening and it left me thinking about the accident. Great Snippet and look forward to next week. :-)

Sherry, I liked the set up with the black cats and bad luck. I suggest you remove the "Jim wondered" tags since it's only him in the car and we know he's thinking it. Also, I'd change "unsurprised" since even if you believe in black cats being bad luck, he hadn't seen one, and the sports car being in trouble should surprise anyone into thinking "OMG, is anyone hurt?" Great idea to set up for an upcoming event. :)

The Belle in Blue said...

Great foreshadowing with an unexpected follow through. Enjoyed the snippet!

OMGosh, that was an unexpected turn! Love the anticipation with the black cat, though anyone who would fly around a sharp turn in the road certainly shouldn't be surprised by what they get. *shudders*

Jess, I'm sorry my snippet raised some bad memories for you, but it is also based on a true event. Dh and I were in the car that was overtaken. I'm glad to say that, against all the odds, the occupants of the real event walked away shaken but not injured.
Not so in my story.
Thanks for leaving a comment.

:-) Sarah, the accident was based on reality, the outcome in my story is different. Thanks for coming by.

Thanks for your kind words Brenda. I'd hoped to visit most folk today, didn't happen so hope to get round tomorrow.

Siobhan :-) I so appreciate your advice as it's on the money. Thanks a lot.

Thanks for your kind words The Belle in Blue. I hope to get round everyone tomorrow.

Sarah, it really happened. Thankfully the idiots survived without a scratch.

Unsurprised, maybe, but I bet there's some shock.

Very true Sue. Thanks for coming by.

An interesting comparison of the attitudes to black cats, but then - wow, what a finale to that, with the sports car!