Welcome to Tuesday's Tales
Once again, many thanks to all those who drop by each week. I also appreciate, and often act upon comments and suggestions left.  Many thanks.
This week we are doing something different. Each author is going back through their Tuesday's Tales offering and choosing one of their personal favourites. This week I am revisiting my first ever Tuesday Tale. Why? When it is such a dark story, and I normally write 'sweet' or Regency romances, have I chosen this one?
Well... because it was my first challenge and arrived so quickly it took my breath away, and because the content astonished me. 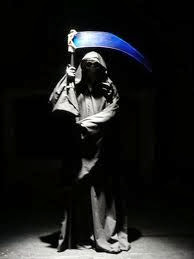 Lies  First posted for TT. on January 2012
Jenny  skipped along the street, her pigtails flying, her eyes shining, and a permanent smile on her face. She carried her present for Shirley in the plastic carrier bag hanging from her arm, her Cinderella costume blowing in the breeze. Today her bestest friend was celebrating her ninth birthday with a fancy-dress party,
and next week it would be her turn. Somehow, the figure nine seemed more grown-up than eight. Nearer double figures.

“You going to Shirley’s party?”

She’d seen the boy in the school playground. Always on the edge of a group, always watching, and, she shivered now, something about his eyes made her uneasy. Today  was no different, and his costume didn’t help. His smile was inviting, warm and almost gleeful; yet, secretive, Shirley decided.

“What are you dressed up as?” She studied his cape and the scythe he carried, its blade gleaming in the sun.

“The Grim Reaper,” he said. “And my friend Herakles will be joining me in a moment.”

Damien, that was it! She’d never liked the name because it always made her think of demons; and demons, she knew, were scary. Lately they filled her dreams, turning them to nightmares.

She never quite saw their faces in her dreams, only heard their laughter, when it turned dark and evil and woke her up.


Jenny looked at the boy walking beside her. Strange, she’d never noticed before, but if her demon had a face it would be like Damian’s.

“How old are you?” she asked in an effort to shake off her qualms. “Aren’t you too old to come to Shirley’s party?”

“Age, is in the head.” Damien smiled. “After all, you think nine as far more grown-up than eight, don’t you? When in reality it’s just the beginning of another day, another number you’ll hang on to for a year.

His eyes, dark as obsidian, gleamed in the sunshine, his hair reminded her of the huge raven that stole food off the bird table this morning, and cawed at her mother when she chased it away.

Sometimes, in a certain light, Damien reminded her of the old man who lived in the end house on the street. Rumour and gossip abounded about him, and the school children ran past his home; half hoping he’d come outside, and terrified he
might!

“Never see a light on in that house, me dear,” old Mr. Hawkins, from two doors down, told her one day. “Best to stay clear of the place. That’s what I say.” And cackling he’d wandered off into the nearest shop.

Jenny stopped at the pedestrian road crossing and waited for the lights to change from red to green.

She stepped into the road, thankful Damien hadn’t followed. Reflected in the shop window ahead of her she saw him standing on the pavement, watching her, his smile one of satisfaction this time.

She didn’t hear the car that ‘came from nowhere,’ didn’t hear the screams of horror that filled the air when the car never stopped, never saw Damien vanish into thin air, to reappear beside the driver of the car.

“Promise me she didn’t suffer,” he demanded of Herakles. “I didn’t like lying to her, she was a sweet kid.”

“She didn’t suffer,” his companion assured him.


This story and several others are permanently available over at http://authorsherrygloagtheheartofroman.weebly.com/lies.html
~ ~ ~ ~ ~ ~ ~

I remember this post. Scared me then and scared me again today. I got goosebumps reading it. Never thought you had such a dark side. But it was intriguing, too. Pulled me in, the dark yet oddly sympathetic character of Damien. Great post, great story.

My stars, that was one scary read. Well done!

Glad you enjoyed it again, Jean :-)It surprised me too when it was finished!

Yes, I remember this post and it gave me the shivers now as it did originally

That was an interesting twist from you! You write in this genre as well as your romance. I loved it!