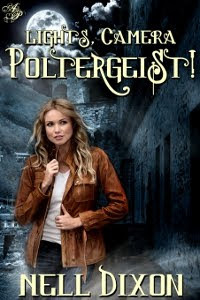 Thank you so much for inviting me to your blog to talk about my latest release from Astraea Press. Lights, Camera, Poltergeist! will be my 21st title release! So a kind of coming of age.
For those who haven’t met me before my name is Nell Dixon and I’m a author based in the Black Country, a small region which is more or less dab bang in the middle of the . I write for a number of publishers in the and the and have been fortunate enough to twice win the ’s prestigious romance prize for category length fiction. I’m the only person to have won twice.
Lights, Camera, Poltergeist! Is set in , and yes there is a man in a kilt in the story, but I’m not going to spoil the surprise!
Here’s the blurb: Things don’t just go bump in the night, sometimes they throw tea cups!
As the presenter for Ghost , the leading TV show investigating paranormal activity, Fae thought she’d seen it all. Until a Valentine’s Eve live show from ’s Fingelly Manor upsets both her preconceptions and her love life.
And a wee taster!
Fae snuggled down deeper into the chunky knitted roll neck of her sweater and wished she could shake off the eerie sensations. She puffed out a sigh and watched her breath condense in the air before her face. It wasn’t only the room that was chilly. The relationship between herself and John had taken on a distinctly frosty tinge lately too.
She strolled across the room to the huge diamond leaded window that would have filled the room with light if it hadn’t been shrouded in dust and some dark red velvet drapes that had seen better days. Out in the corridor the electricians and tech staff were hammering and cursing the ancient electrical wiring.
The afternoon light had already started to fade and fingers of frost were beginning to form at the corners of the window. A flicker of movement near the trees on the far side of the lawn caught her attention and she leaned forward, almost bumping her nose against the glass in her quest to see what it was.
Whatever or whoever she thought she’d seen had vanished and she relaxed back on her heels. Working as a presenter on Ghost had made her jumpy. Every dark corner now held the possibility of something spooky. In such a deserted spot it was unlikely that anyone would be outside in the grounds, especially in this freezing weather.
“Fae, darling, there you are!”
She turned around to see her producer, Tim, sweeping towards her. She pasted a fake smile on her lips when she saw he was accompanied by the owner of the house, Giles McGinty, Laird of Fingelly. She’d already met Giles when she’d arrived and her impressions hadn’t been favourable.
“Giles has invited us all to dinner tonight before we start filming. Isn’t that marvellous?” Tim raised his eyebrows at her.
“That’s very kind.” Fae was quick enough to pick up the signal.
Giles smiled at her, his gaze lingering just a fraction of a second too long on her bust before raising his gaze to her face. “The pleasure is all mine. I’m looking forward to getting to know you all better before the filming.”
She suppressed a shudder as his dark eyes locked on her face. “John and I will look forward to it.”