Today Mickie is going to introduce us to her hero from Like Slow Sweet Molasses Lt. Brock "Chance" Alexander, NOPD.
(Released January 10, 2013) 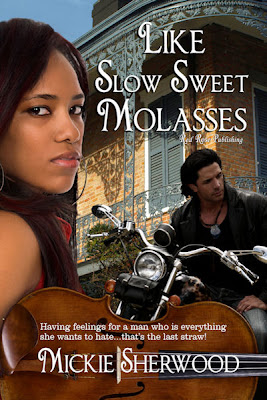 Interview with Lt. Brock "Chance" Alexander, NOPDI watched the reporter walk toward my office with her voice recorder already in hand. She seemed hesitant, at first. Like she was afraid to step over the threshold. I wondered what thoughts ran through her mind as she lingered in the doorway. Was that fear on her face? Then, I realized I probably looked like death warmed over. It had been a long night. And—the day promised to be just as long because the department authorized this interview for community PR reasons. "Come on in and have a seat," I said. Her eyes kept wandering to the knot on my jaw as she walked over. I touched it. It was still as painful as hell; probably still purple, too.

She dragged in and sat down, but right on the edge of her seat.
"I only have a few minutes to spare," I announced. I had to perform for the brass. They didn't say for how long. I propped my elbows on my desk, hands clasped and immediately regretted the move. I looked at them. My knuckles were scraped raw and meat-red. Small price to pay, I thought, to bring down a suspect. "First question."
She turned on her recorder, placed it on the desk right in front of my face and proceeded with the interview.
"What made you go into law enforcement, Lt. Alexander?"
I didn't have to think about that answer.
"I had no choice in the matter. A family crisis pushed me pretty close to crossing over to the wrong side of the law at an early age. I found myself facing the prospect of a lengthy stay in juvenile detention or a chance at rehabilitation with the caring family of a police officer. He took me under his wing, treating me like one of his own. I learned a lot from him, including his healthy respect for the law."
"How does your wife feel about your profession?"

Hi Mickie,
Loved reading the excerpt...Can't wait to download this to my reader. As a matter of fact, I'm saving it for next week on the ride to Washington. Continued success with your newest release and all of your other endeavors.

I'm really excited about Like Slow Sweet Molasses. I can't be impartial about this. It's a great read, if I do say so myself. ;)

Good morning, Sherry, and thanks for hosting me today. I'm excited to introduce Lt. Brock "Chance" Alexander to your visitors. He is a force to be reckoned with in my new love story, Like Slow Sweet Molasses.

I can't wait to read their comments and answer questions.
Afterward, they can check out a new tantalizing excerpt I've posted at Blurbs in Bloom http://www.blurbsinbloom.com/2013/01/new-release-like-slow-sweet-molasses.html .
Thanks, again.

This is one nice excerpt. You rock!

I do think I was on a "roll" when I created Chance and his Angel.

I'm glad you stopped by.