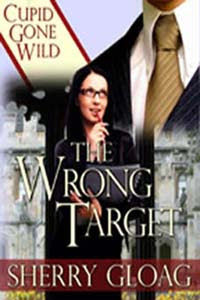 I thought I'd share a little bit more from my first Valentine novella, The Wrong Target, with you this week.

“Who does the man think he is, swanning into my office as if he owned the place?” Tina stared at her reflection in the washroom mirror. Shoulder-length chestnut-brown hair snuggled into the curve of her neck.  Her wide, gloss-covered lips curved into a smile more often than not. Her sloping shoulders resisted all her attempts to carry her bag. Long, tapered fingers ended in polished nails that owed nothing to varnish. With a  huff she moved away from the mirror. As if a man like Ryan Thomas would see her as a desirable female, and why, she asked herself, did she even give the thought a moment’s consideration? To him, she was the woman causing him grief and inconvenience, despite her justification.

“He waltzes into my office regardless, demands his daughter’s reinstatement, and to top it off, his blasted arrow attacks me.”

“Talking to yourself again?” Helen’s reflection grinned over her shoulder. “And why is that arrow
sticking out of your desk like a contender for a popular cider TV advertisement?”

"We tried pulling it out, but it wouldn’t budge. Talk about King Arthur’s sword! We could use Merlin’s help to remove it.” No need to describe Ryan Thomas’s chagrin when he, too, failed to free the arrow.
Visit Sweet Saturday Sample to read more gifted authors' offerings.
at 06:00

Looks like the fireworks have already started. Nice excerpt.

Looks like Cupid has his work cut out for him to make this right! Great sample!

Oh, delightful snippet...sounds like the kind of conflict that can turn into something more.

Thanks for sharing...and for visiting my blog.

What a fun story! I love a romance with a sense of humor.

Glad you enjoyed it Laurel-Rain

I enjoyed the excerpt. Her description showed her well.