Book Release - Love Will Find You by Iris Blobel 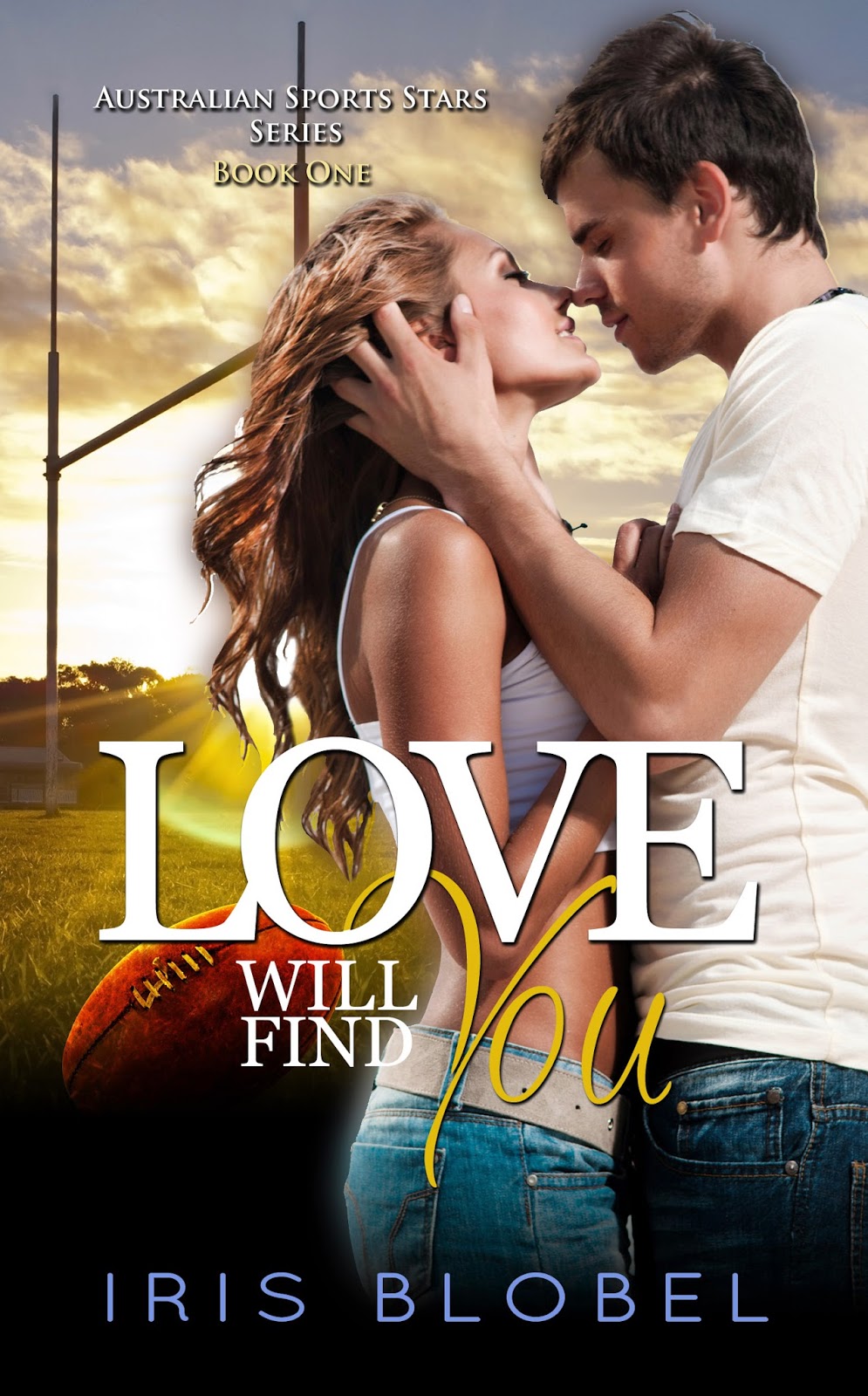 Love Will Find You By Iris Blobel
Blurb:
Can their new love survive the scrutiny of the public eye?
After his father’s heart attack, Australian Football League player Tyson Gaspaldi takes his parents on holiday to a small place at the New South Wales coast.
One morning, following a surfing session, he comes across a crying woman on the beach. Everything about her intrigues him, and he can’t walk away. She’s not only sexy and humble, but, as he soon finds out, vulnerable as well.
It’s only been a few months since Katie Cassidy lost her sister in a car accident.
Still overwhelmed by the loss, a chance encounter on the beach with an attractive stranger awakens unexpected emotions inside her. She’s instantly drawn to his caring nature, but also his looks.
However, Tyson’s past quickly catches up with them, causing Katie’s childhood demons to return, and the road to romance becomes anything but smooth.
Excerpt:

Tyson held the Brownlow Medal in his hand, but celebrating was the last thing on his mind. His fake smile was as much a lie as the last message he’d sent to Katie the day before. As a result, it was his mother who sat in the crowd amongst his teammates, his friends, the footy world, reporters, and whoever else was important—and not Katie. His gaze wandered around the ballroom, with all the round tables neatly positioned in nice rows. Each table was beautifully set with dinnerware, menus, and a floral arrangement. The TV screens on either side of him showed a close-up of the stage, and as he tried to protect his eyes against the bright lights, he watched them all, making toasts, their glasses filled with the best champagne, applauding his achievement.
The crowd settled and awaited a speech. His speech. Nervousness crept up in him as he stared into the audience. His throat burned as the acid in his stomach churned.
The Brownlow Medal was awarded to the best and fairest football player of the season, yet he didn’t think there was anything fair about the way he’d treated his girl.
Tyson Gaspaldi took a deep breath, unfolded his little note, and cleared his throat. The first word he focused on was her name, Katie. He blinked to refocus and thanked his mother as well as his family. It came effortlessly once he was past the initial hurdle and in only a few minutes he finished, held up his medal, and walked behind the stage.
Why had he said the things he had? Why didn’t he just answer her question?
A short time later, Tyson joined his friends and his mother at the table again.
“Congratulations, darling.” His mother took his face into her hands and gave Ty a kiss on his cheek. Only a few years ago, he would have been embarrassed by such open emotions in front of a crowd, but since his father’s death earlier in the year, he welcomed every sign of affection by his mother.
“Thanks, Mum.”
“Dad would be so proud of you.” Caroline Gaspaldi took a step back and gazed at him. Pride radiated from her eyes. “Look at you. You should wear a suit more often.”
His friends around the table gave him a quick clap on the shoulder and congratulated him before sitting down to proceed with the evening. Ty noticed his phone buzzing and with a flick of his finger, he scrolled down his messages. He stopped at Katie’s message from earlier in the day.
I don’t believe u!
With a heavy sigh, he switched off the screen, ignoring all the other new messages and the phone into his pocket. He took the beer in front of him and tried to concentrate on what the guy on stage was saying. Out of the corner of his eye, he spotted a woman at the other table. She looked incredible in her shimmering silver evening gown. The décolleté of her dress revealed tanned skin upon which a delicate necklace hung. Her curly brown hair was pinned up in a ponytail which made her look very sexy. When she smiled at him, he winked at her in return.
“What are you doing, Ty?” his mother whispered into his ear.
Buy Links:
Amazon Australia: http://www.amazon.com.au/Love-Will-Find-Australian-Sports-ebook/dp/B00NMYIVDE/ref=sr_1_1?ie=UTF8&qid=1412333131&sr=8-1&keywords=love+will+find+you%2C+iris+blobel
Amazon US: http://www.amazon.com/Love-Will-Find-Australian-Sports-ebook/dp/B00NMYIVDE/ref=la_B00KCJOA28_1_2?s=books&ie=UTF8&qid=1412331685&sr=1-2
Kobo Books: http://store.kobobooks.com/en-US/ebook/love-will-find-you
Barnes & Noble:   http://www.barnesandnoble.com/w/love-will-find-you-iris-blobel/1120428127?ean=9781500920227
Author:
Iris Blobel was born and raised in Germany and only immigrated to Australia in the late 1990s. Having had the travel bug most of her life, Iris spent quite some time living in Scotland, London, as well as Canada where she met her husband. Her love for putting her stories onto paper only emerged a few years back, but now her laptop is a constant companion. Iris resides west of Melbourne with her husband and her beautiful two daughters as well as their dog. Next to her job at a private school, she also presents a German Program at the local Community Radio.
Where to Find Me:
My Blog: www.iris-b.blogspot.com
Facebook: www.facebook.com/irisblobel
Goodreads: https://www.goodreads.com/author/show/4067254.Iris_Blobel
Twitter: @_iris_b
Pinterest: http://www.pinterest.com/iblobel/
Google+:  https://plus.google.com/107759085454255573026/posts
at 00:30

Thank you, Sherry, for the shout out!