EsKape into a book ~ A double book-box-set bonanza

Holidays are a time for fun and relaxation, well if you're not off chasing extreme adventures or the suchlike :-) And with Thanksgiving, and Christmas just round the corner, what could be better than to snuggle down in a comfy chair, in front of a fire, with a good book? Or even a great box set of books!
Along with many other awesome authors Eskape Press have generously included my light paranormal romance, He's My Husky, in their Holiday Eskape box set. 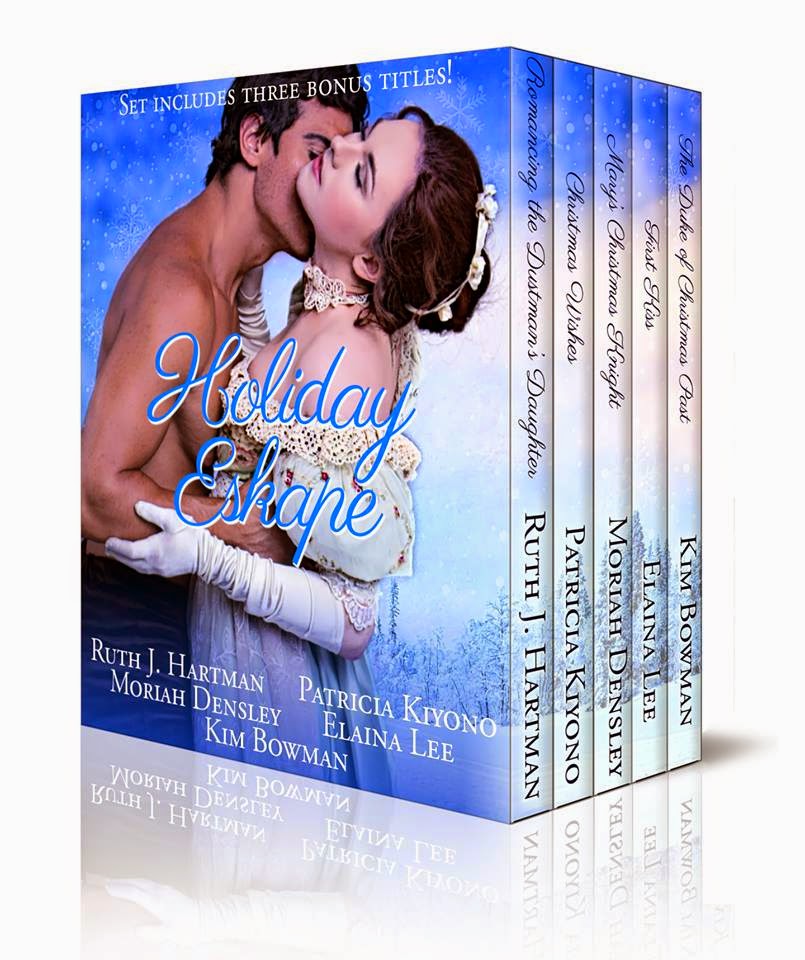 And to celebrate they're doing a fun little contest. To play, you need to read my excerpt below, so please, don't fall asleep!  All you have to do is to follow the instructions over at Eskape Press's FB page
and answer the question about the except and you'll be entered to win a prize from EsKape Press!


* * * * *
Would she come? Max had thought long and hard about his options and decided this way would be less frightening for her. But was he right? More than ever, after what Emma had told him last night about Shane’s growth spurt and bursting his shirts, Max wanted, needed, to protect his son and the woman he now hoped to marry. His ego and selfishness had cost him the chance to be there for Emma and Shane. If things worked out, he’d do everything he could to…

A weak sun still managed to hold off the promised rain and twinkles of sunlight bounced off the bare tree branches above his head. To some it might seem eerie; to him it smelt natural, of nature. He could hear nearby animals rustling in the shrub, could smell the rabbits as he passed their burrows. A hawk keened overhead and Max wondered whether it was in optimism or intent. His skin itched and tingled, his muscles tautened and his fingers curled at his sides. His clothes rubbed against his sensitized skin and his shoes slowed his progress.

A couple walkers bade him a good morning, and he hoped there weren’t too many other people intent to beat the weather. As if to dash his hopes minutes later a couple of men, guns slung over their shoulders, came into sight. They stopped and stared at him then turned off on another path with an abruptness he found disconcerting. He hoped that whatever their destination, it wouldn’t involve a return to this clearing in the trees and the silent pond Emma had mentioned.

He looked round, sniffed the air and satisfied, began to shed his clothes.
****
Emma picked up the wash cloth Shane dropped on his way out and sighed. In some ways, due to his incredible height, she often forgot how young her son really was. Right after her meeting with Max she’d have to shoot into town and buy him more new shirts. She would call in on Sue. How could one day change a life as much as it had for her friend? Was it Sue’s belief that Friday the thirteenth was a harbinger of evil that prompted Tyler to wait until yesterday to act as he had? She’d never tagged Tyler as vindictive, but then what did she know about men? Not a lot. And while she had Shane to bring up she wasn’t too bothered about the fact she didn’t have a man in her life. She’d only ever given herself and her heart to one, and for her sins, she couldn’t get past him, couldn’t look at another man without seeing those earth-brown eyes, the wide shoulders and hands that brought her out in goose bumps just thinking about them roving over her body.

Magic! Those hands, the way they stroked across her skin, trailed over her back up her legs, and caressed her breasts, were pure magic. And then he’d added his lips to the magic and sent her up in flames. Why didn’t her heart believe her when she tried to convince it love had nothing to do with that night? It had all been about lust.

With an oath Emma swept up the breakfast dishes, rinsed them and posted them into the dishwasher. One of the bonuses of being self-employed meant she could shift her weekends to suit herself if Shane’s schedule allowed. This morning she took the time for herself ,she’d make up for it while Shane stayed over at Tim’s house tonight. It didn’t take long to tidy the bedrooms and clean out the bath, before changing into suitable jeans and warm jumper for the walk to the woods. Why had Max used a wolf, a wolf for goodness sake, to bring her a message about their change of plans? Never mind, her lips curved into a smile, that it was an amazing wolf.

If it had been a human it would have been a hunk of a specimen.

She changed her slippers for sturdy shoes, hauled on her coat and at the last moment grabbed a scarf and wound it round her neck.

She passed a couple of young mothers pushing prams and stopped to talk to both of them. How the years sped by, she thought, as they separated and went on their ways. She’d babysat both those girls when they were young, now they had children of their own… and loving husbands. If only things had been different… But they weren’t. So she’d suck up the useless longing and do what she’d done for the last ten years. Get on with it.

The washed-out blue sky gave way to thin grey clouds with their big brothers piling in behind them, dark, threatening and tinged with yellow. No one, she thought, as she gave the clouds a last look before stepping into the wood, had said anything about snow.

“Best be careful, Lass,” Ben Buckner warned as she met him and his buddy Brody Kemp coming in the other direction. How those boys ever passed an exam was beyond her, they never seemed to spend a full day in school, and yet they’d finished this summer with the best marks in their year.

“We passed a stranger not long back.” He jerked a thumb over his shoulder.

“Looked harmless enough,” Brody agreed. “But you never can tell.”

And with their well meant but dire warnings ringing in her ears, Emma followed the path that led to what she called the Fairy Den.

A few minutes later, Jed and Tupper, guns slung over their shoulders, blocked her path. She wasn’t afraid of them, precisely, but preferred it when they kept walking without comment. Rumour had it they were the two best poachers in the county and, in spite of their downtrodden appearance, were rolling in money. The first she believed, the second never quite rang true.

“Thur be a stranger in the woods, Missy,” Tupper growled. “He’s by yon pond, you best be careful where’s you walk today.”

Jed nodded, allowing his lips to move just enough for Emma to see two of his blackened teeth before they closed in a firm line again. “You’s take care then,” he added to his companion’s counsel, and without another word, both men walked away.

Anticipation had Emma increasing her speed, and she almost ran into the clearing ten minutes later. Disappointment had her skidding to a halt when she found no sign of Max waiting for her. Surely there couldn’t be two strangers walking the wood on the same day, when normally only the locals used these paths in the winter.

She looked round and shivered. Never had this place, normally so dear to her seemed so alien as it did today. The dark clouds had crowded out the wispier clouds and banished the sun, leaving the wood in deep shadow. A shiver chased up her spine. Should she leave, hope Max would come to her at home?

The protest rang inside her skull and she searched the area again. There! On the other side of the clearing stood the wolf from last night. She may not have seen the animal clearly during the night but instinct told her it was the same creature.

“I saw a couple of hunters.”

Hunters? Emma sought to equate his description with any of the locals and wondered whether he referred to the recent school boys. But no, both pairs of men mentioned one stranger. Hunters?

“Oh,” she said, when it dawned on her the wolf referred to Jed and Tucker. “Not hunters, exactly. Poachers, but you’re right. I wouldn’t want them to see you.”

“Would they shoot if they did?” The wolf remained in the shadows.

“They might.” Emma admitted after giving the matter careful thought. “As a trophy,” she expanded. “There aren’t any wolves left in Britain, other than those in zoos, so yes, they might shoot you if they saw you. And if they didn’t they’d set traps to capture you.”
* * * * * 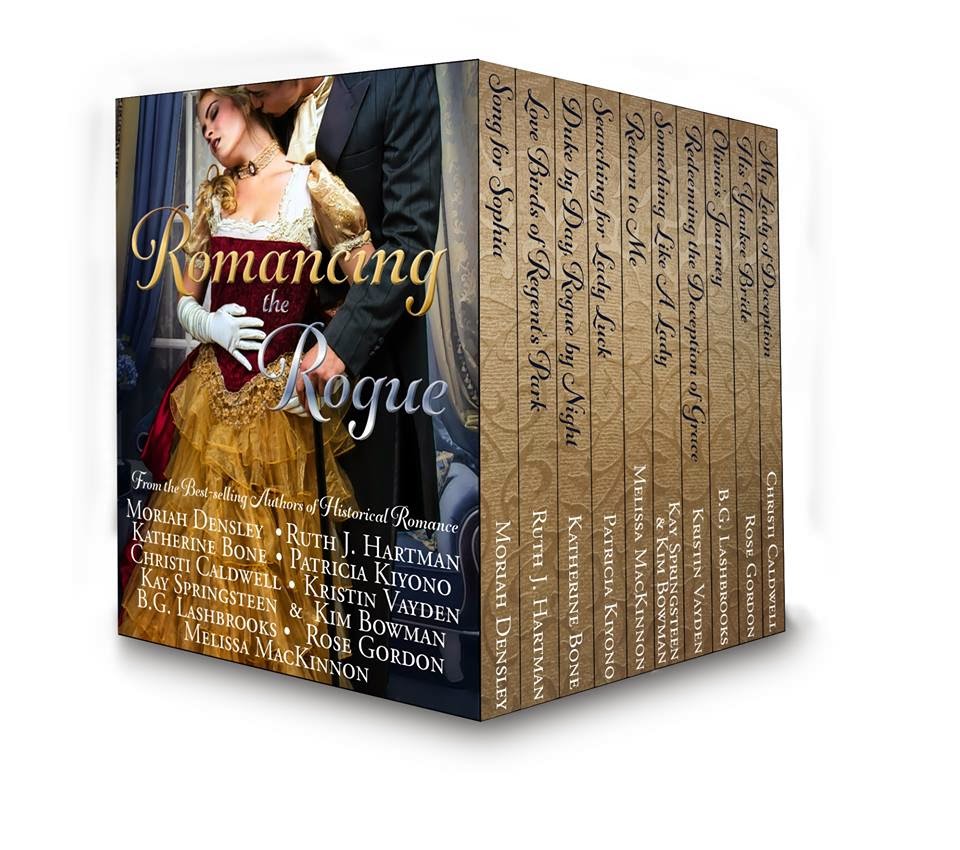 As if this isn't enough, you can also get a second box set of Regency story goodies :-) Don't miss this chance stock up for your holiday reading :-)

Thanks for a great excerpt, looking forward to reading the rest!

:-) Thanks for coming by kaisquare. I hope you enjoy all the other blogs too.