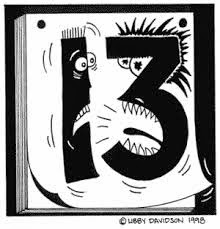 Did you know that the number thirteen is the most feared number, apparently, in the world?

In ancient Roman times Friday was execution day.
In the UK Friday was the day for hangings.

According to the Bible, it was a Friday when Eve presented Adam with an apple. And they are both purported to have died on a Friday.

But then you get...
Clothing made on a Friday will never fit properly.
and...
Never change your bed on a Friday, as it will result in nightmares and bad dreams. 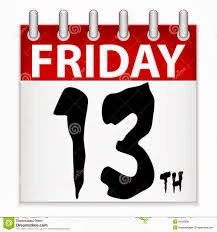 Combine the two and you have a recipe for disaster!

Do you know how may American's are thought to fear Friday the thirteenth?
8%! which relates to an estimated 21 million people. That is staggering.

Then of course where will you find a table set for thirteen dinner guests? This superstition is said to originate with the Last Supper at which Judas Iscariot was the last person to take a seat at table.

The thirteenth card in a Tarot deck is "Death" often pictured as the Grim Reaper (a skeleton, often in a hooded cape, carrying a scythe). It should be noted however, that the Death card is rarely if ever read as "death" but as transition, change or new beginnings.


But today, this Friday the thirteenth will be lucky for one commenter as I am
GIVING AWAY
a pdf copy of my first novel, The Brat.
All you have to do to be in with a chance of winning
is to included your email with your comment
before the end of the day.

Ben’s angry retort had slipped through the still-open door as she left the room, and startled by his words, she’d shamelessly stopped and listened.


It seemed her past and future were on a collision course, and she had no idea whether she’d be obliterated on impact. Ben’s pronouncement about his intention to protect her, warmed her heart, made her feel all gooey inside. No one had ever gone to bat for her before. A river of gratitude and something more coursed through her veins.
Amazon   Barnes & Noble
at 14:40