Today Minnie Schultz, from Hauntings of the Heart, interviews Joselyn Vaughn the author. 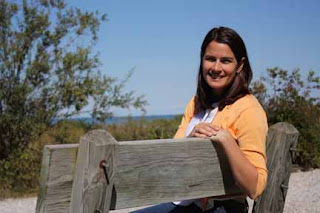 Minnie: Everyone probably wants to know why you write romance, but I think the answer to that is obvious. Romances are wonderful stories. What’s better than a happy ending?

Joselyn: Not much. I have to agree.

Minnie: So let’s get to the real dirt. How did you meet Mr. Vaughn?

Joselyn: We first met my freshman year in college—

Minnie: And it was love at first sight.

Joselyn: Umm, no. We didn’t talk again for two years.

Minnie: Why not? He’d awfully cute. Someone could have snatched him away from you.

Joselyn: Not a chance.

Minnie: Ah-ha. I see. No wonder he was still available two years later. I hope he rectified that unfortunate hair decision.

Joselyn: Well, he shaved his head and grew a goatee. But it’s a much better look for him.

Minnie: So then what happened?

Joselyn: He ran down three flights of stairs to hold the door open for me as I was moving into my apartment at the beginning of the school year.

Minnie: A good ploy. Did you drop the box so he could carry it for you? That’s my go-to suggestion.

Joselyn: No. I didn’t see him much after that.

Minnie: But didn’t you live across the hall from him?

Joselyn: Yes, but I travelled a lot with the cross country team.

Minnie: Well how did you finally get his attention? I can’t believe you didn’t call me for help. My friends and I could have straightened this out in two shakes.

Joselyn: My roommates and I tried to get him to come over to fix things, but every time we’d knock on the door we’d get one of his roommates.

Minnie: Were they single?

Joselyn: Yes, but they had committed much worse hair atrocities than mullets. I can’t even describe them, besides there was only one man over there I was interested in. So finally, it came down to the Christmas banquet. Somehow my roommates and I decided I should ask him. Roommate #1 said she would ask him for me (since she was friends with him), but she was already in her porky pig pajamas and she wasn’t going across the hall dressed like that. She said she would call. Roommate #3 was on the phone, so Roommate #2 went across the hall to borrow their phone. (This would have been so much less complicated after the advent of cell phones. J) Roommate #1 tried to call, but the guys wouldn’t answer their phone, thinking it was something weird with their phone being used in our apartment.

Minnie: Did you finally get him to go to the banquet with you?

Joselyn: Yes. If I remember, I had to call him myself when our phone was free. Mr. Vaughn was oblivious to all the previous adventures as he was studying for a Spanish test. Hey, what are you writing?

Minnie: Oh nothing, never mind me. And what exactly did you do after that?

Joselyn: Give me that notebook. Hey! Minnie! This better not end up on your blog. Where are you going? Come back here.

I can’t believe she can run that fast. 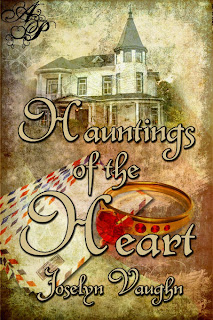 Blurb:When lost love shows up on your doorstep, what do you do? Minnie Schultz slams the door in his face. She and Gordon Anderson have a history—close to ancient history, given the fifty years since their last encounter. After all that time, it might seem like water under the bridge. But the water pours from the plumbing in Minnie’s bed and breakfast, the Lilac Bower, uncovering all the secrets and heartache between them. With the help of some paranormal investigators, an Elvis impersonator and a couple of nosey friends, can Minnie and Gordon find the future they were meant to have?
Buy Links:
Astraea: http://astraeapress.com/#ecwid:category=662245&mode=product&product=7355585
Amazon: http://www.amazon.com/Hauntings-of-the-Heart-ebook/dp/B005Z8WJRY/ref=sr_1_1?s=digital-text&ie=UTF8&qid=1319568032&sr=1-1
Barnes and Noble: http://www.barnesandnoble.com/w/books/1106922258

I loved your interview. So cute.

Thanks Elaine. He keeps asking when he can model for one of my covers. I tell him not until one of the heroes looks like him.

Love it! Adorable interview and I'm still wondering how you two got together and how long it was before you got married. Great interview!!

Thanks, Jean! We started dating right after that and got married two years later. In a blizzard, but that's another story.