Thanksgiving with an English Mum

Thanksgiving with an English Mum
By Kay Springsteen

﻿
There is just something about holidays in America. There are seven main holidays in the United States – meaning most companies offer these days off or offer extra pay for working them. New Year’s Day, Easter, Memorial Day, Independence Day, Labor Day, Thanksgiving, and Christmas. There are a myriad of others that are referred to as “bank holidays” (an outdated term), in which if you work in a government office you will be granted those days off but frankly many people don’t celebrate them, and I’ve run into more people lately who don’t know what these holidays ever are or what they were started for. And there are holidays that are celebrated like crazy but time off and/or overtime never figures in – such as Valentine’s Day, St. Patrick’s Day, Halloween… Add in Mother’s Day and Father’s Day and you have 12 months of Greeting Cards. But also 12 months of fun.

One of the American holidays I grew up taking for granted is Thanksgiving. As a youngster, it was fun only in the morning when my dad would turn on the TV and we’d all watch the parades together. This was back in the days where the parades were more about the elaborate floats and less about the personalities hosting them or the acts that would stop the parade while they performed. It was simpler, and in my opinion, much more fun to watch. In school for the week or two prior to the holiday, we had learned about fall things, harvests, Pilgrims and Indians – and the specifics of what we learned depended on our ages and grades. But

But I never fully understood that Thanksgiving, from my mom’s perspective, was a non-holiday. Not until I was older and learned that she had emigrated from England in 1947, and that England did not celebrate American Thanksgiving did I “get” that we were not the center of the universe, that other people in other countries had their own celebrations and American Thanksgiving was…well, American. My mom embraced the holiday as one where we would gather as a family, and we had our traditions of turkey and all the embellishments of that meal. The house smelled incredible starting the week before because Mom would bake pies and cookies every day. The lingering scent of sugary treats baking mingled with the savory aroma of roasting meat on Thanksgiving morning, and our stomachs were all growling by midday.

But though she embraced the traditions, my mom admitted to me that she simply didn’t understand the holiday. It was her belief, you see, that every day should have time set aside for giving thanks, not just one day out of a year. With that thought, I saw things more clearly. And yes, I still enjoy the traditions of the holiday. But my mother instilled in me an “attitude of gratitude” that I try to hold onto all year long. Because we shouldn’t remember to only give thanks one day out of the year. 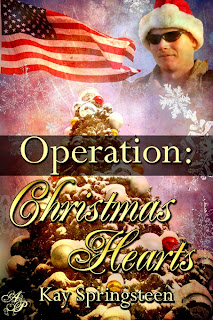 Here is a peek at my latest book, Operation: Christmas Hearts, released tomorrow by Astraea Press, just in time for Christmas

Blurb:
Ashley Torrington never cared all that much about Christmas before. But this year she’s having a particularly blue holiday because Marine Special Operations Team member, Captain Nick Turner got under her skin just before he was deployed to Afghanistan. With Bella, her neighbors’ precocious daughter, volunteering Ashley for a special project at school, and a mysterious white-haired woman named Estelle in town buying gifts from Ashley’s shop, not to mention the odd assortment of presents Ashley’s been receiving from an anonymous source, she shouldn’t have time to worry about her guy. But when he and his team go missing the week before Christmas, she realizes only a Christmas miracle will reunite them.

Nick Turner didn’t back down from challenges—on the battlefield or in his personal life. But he’d never met a challenge like Ashley Torrington, who told him up front she didn’t like being left behind and didn’t want to be anyone’s “girl back home.” Now here he was on the other side of the world, wanting to be anywhere but in Afghanistan for Christmas. About to embark on one of the most dangerous missions of his life, he needed Ashley to know she was so much more than the girl he’d left behind. And he did plan to come home to her. But in the meantime, a little Christmas magic would be appreciated. Little does he know, he’s about to get his wish.

Of course I found you, Kay. Far right. I recognise Barry and Sondra, too, at the far left. The only one I don't know is the older lady sitting next to your dad.