Cindy Davis ~ On The Hook ~ Interview 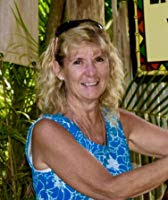 Please welcome Cindy Davis who is best known for her murder mysteries and romantic suspense, many of which were set in her home state of New Hampshire. And have achieved considerable success. Now, a transplant to Florida, Cindy has found herself changing not only place of origin but also genre since her latest work is a New Age fiction penned with her husband Rick

She is an award winning freelance editor who's worked in both fiction and nonfiction with over a thousand authors.

Today Cindy is sharing an interview with Smith and Wesen, but first here is the blurb for On The Hook. 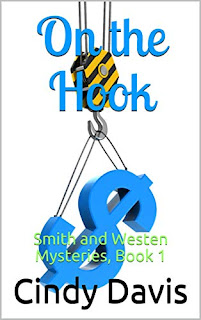 The multi-million dollar painting is there, then it's not. It's gone, but it can't be.

* Kendra Jean Valentine, underwriting agent for the policy, is on the hook. She scrapes together enough to hire two women to work the case.Two 'regular' women no self-respecting insurance agent would look twice at. Which is exactly why KJ thinks they're perfect.

* Westen Hughes owns a failing pet shop. With creditors phoning daily, she jumps at the chance to earn a bundle of easy money, even though the offer comes from high school nemesis KJ Valentine, who stole everything in high school:head cheerleader, homecoming queen and the star quarterback.

* Phoebe Smith is a snake-loving, underwear-hating, tuba player with more baggage than Logan Airport--Westen's total opposite in all ways.
Ten percent of a hundred million is...

Well, it's a lot so Smith and Westen join forces on a roller coaster ride to find one of the world's most valuable paintings.
On Th Hook

Interviewer: Tell me a bit about your childhood. How did it shape the adult you are now?
Westen: I had a normal childhood with parents who cared what I did. They kept me in line, taught me right from wrong, made sure I did my homework.
Smith: Same here.
Westen: Wait a second. You told me your parents let you run wild.
Smith: That showed my brother and I that they cared. We learned from our mistakes.

Interviewer: Tell us about your parents. And siblings, if you have any.
Westen: I am an only child. My parents were both elementary school teachers. They died within two years of each other when I was nineteen. I had moved out of the house by then but it still affected me a lot. We were very close.
Smith: My parents were both referees—Dad for the NFL, Mom for women’s basketball. They were gone pretty much all the time from October to April. Which gave me a solid disdain for all sports. I have a twin brother named Bellamy who was a pro basketball player until his retirement. Now he’s a coach for the Toronto Raptors. I try not to hold that against him.

Interviewer: Did you participate in extracurricular activities?
Westen: Not really. I was in the drama club. And I was head cheerleader.
Smith: Snorts loudly. You were valedictorian of your high school class. You were prom queen. And you dated the captain of the football team.
Westen: Those aren’t positions a person applies for. They are often thrust upon you. Remember what happened.
Smith: Oh yeah.
Interviewer: What happened?
Smith: KJ Valentine. ‘Nuff said?
Interviewer: Not really. Who is KJ Valentine?
Smith: Snarky laugh. More like what is she. She stole all those things from Westen.
Interviewer: You’re kidding.
Smith: Hell no. Tell her, Westen.
Westen: You just did. Why don’t you stick to the subject?
Smith: Offended. I thought that was the subject. Okay, okay, I played the tuba.
Westen: Snarky laughter of her own.

Interviewer: Tell us about your first boyfriend.
Westen: The aforementioned captain of the football team.
Smith: Stolen by the aforementioned KJ Valentine.
Westen: Clears her throat.
Smith: Jeez, okay it was a guy I met while working in a fast food shop.
Westen: Working there! You owned it.
Smith: Clears her throat. Just for a few years. Gave it to my brother when he fell on hard times.

Interviewer: What sort of job did you have before becoming insurance investigators?
Westen: I was a stay at home mom until my husband and son were killed in an auto accident. Then I inherited my husband’s business, Hughes Pets.
Smith: Breaks into hearty laughter.
Interviewer: Why is that funny?
Smith: She hates animals.
Westen: Unlike you who fawns over snakes. Big shiver shakes her entire body.
Smith. Okay, okay, I’ve owned a print shop, a sandwich shop, and a gift shop. She laughs again then sobers. I have a short attention span.
Interviewer: Does that mean you’ll walk out on your partnership with Westen pretty soon?
Smith: Only if she keeps making fun of my snakes. And my tuba playing.
Interviewer: Okay, last question…What was your most embarrassing moment?
Smith: Nothing embarrasses me.
Westen: Face turns red. I was in the middle of a cheering routine when my Kotex pad fell on the gym floor. The boys were practicing basketball at the time.
Smith: Shivers. Eeuw. You never told me that before.
Westen: And if you tell anyone, your body will never be found.

It's been a pleasure having you here today Cindy. Thanks for visiting The Heart of Romance.

You can find Cindy at:-
www.fiction-doctor.com