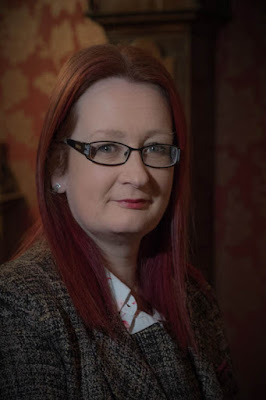 Emily Royal talks about imagery and the thin line between love and hate.

Thank you so much, Sherry, for letting me loose on your blog!

You're very welcome, Emily, and best wishes with your debut novel.

My debut novel The Sins of the Sire is the first in a series called “Dark Highland Passions.” It does exactly what it says on the tin – there’s a lot of passion with a high heat level and it has violence and dark themes. You might say it’s a marmite book, love-it-or-hate-it, best avoided if you prefer your romances sweet and gentle but if you’re OK with dark and a bit of violence it might be for you!
The other word on the tin is “Highland” which is the primary setting for the book. Living about an hour’s drive away from the Highlands, I was able to use my personal experience for a lot of the imagery, from the brilliant sunsets which light up the whole landscape in a glorious pink glow to the heather which gives distant hills a distinctive purple hue.
Before I took writing seriously I did a lot of painting – mostly mountain landscapes but the odd smattering of life drawing too. I still paint, but not as much as I’d like to now I spend most of my spare time writing. My painting experiences have helped me a great deal with imagery for writing. As my art teacher kept on telling me, the most important skill an artist must acquire is the ability to look. The ability to draw was much less important. Not only did she tell us to look, but she also told us to feel – and to express that feeling on the paper while drawing, so we were not just describing the subject in front of us, but also conveying our emotions.
Words are like brush strokes in that respect. A sequence of words can be used to describe how we feel just as powerfully as a few strokes of a pencil. And in much the same way that a work of art can elicit a reaction from a viewer, the right string of words on a page can elicit strong reactions from readers. I only have to read some of the diverse reviews for my novel to see that – from the caustic 1* to the glowing 5* – they have all elicited some form of emotional reaction; strong enough to compel them to post about it on Amazon, Goodreads etc.
As my down-to-earth husband keeps telling me every time I groan about deadlines, promotion, marketing and getting critical reviews: “This is what you’ve always wanted, love.”
And he’s right. I always maintained I wouldn’t want to write anything safe or mild which the whole world “liked”. Bizarre as it may seem, but armed with the knowledge that you can never please all of the people all the time, my objective has always been to have a mix of 1* and 5* reviews rather than a glut of 3* reviews. And I’ve done that! Even my 3* reviews are accompanied with comments to the effect that the reader can’t make up their mind whether they should hate the book or love it.
Objective achieved! 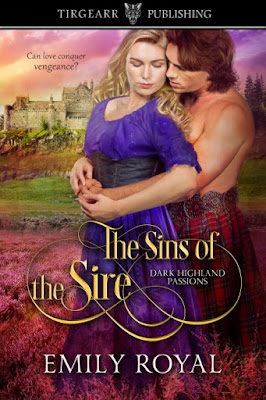 Blurb for the Sins of the Sire:


Two years ago, English noblewoman, Elyssia De Montford, risked her life to free the Highlander held prisoner by her sadistic fiancé. She cannot forget the man who first stirred her heart–a memory that burns anew when she finds herself once more on the road to Scotland.
Tavish MacLean has sworn vengeance. It’s been six years since his beloved sister was raped and murdered by an English lord, a tragedy which almost destroyed his family. On his deathbed, his father demanded retribution and Tavish pledged before his clan to enslave the lord’s daughter then send her back to her father, pregnant with a Scottish bastard. When he learns that she is travelling north, he seizes his opportunity and orders her abduction.
But when his men fling the prisoner before him, Tavish recognises Elyssia, the woman who once saved his life. Loyalty to his clan trumps the debt he owes her and he claims Elyssia as his captive. Though she’s one of the hated English, her willing body ignites passion in him at night, though she fights him at every turn during the day. As time passes, he questions his loyalty, finding himself increasingly enthralled by his fiery captive.
Treachery surrounds Clan MacLean. When long-buried secrets come to light, Tavish must risk his life and his clan, or all that he holds dear will be destroyed.

Author bio
Emily Royal is a mathematics geek who grew up in Sussex, UK and has always had a passion for romance and strong alpha heroes. After graduating from Oxford and enjoying a brief dream of becoming an airline pilot, she started a career in financial services in order to indulge her love of mathematics.
She now lives in rural Scotland with her husband, two daughters, and a menagerie of pets including Twinkle, an attention-seeking boa constrictor. She reignited her passion for romance when she joined the Romantic Novelists’ Association under their New Writers’ Scheme.
When not working on algebra or writing, Emily enjoys cooking, painting, target sports, and playing the piano. She can often be found wandering about the hills of Scotland looking for inspiration.