The changing faces of books 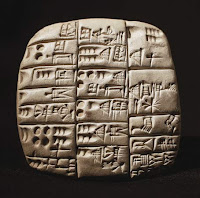 Currently, almost wherever you go, you come across discussions about ebook readers and which one is best, and it got me thinking about the origins of ‘books’.
History attributes the Babylonians and Assyrians to the origins of books. They created flat plates of wet clay – known as tablets - and then used sharp-pointed tools to punch wedge-shaped(cuneiform)characters into the wet clay before it was fired. The information sometimes covered several tablets which were kept together. Certainly we would not recognise them as books today. 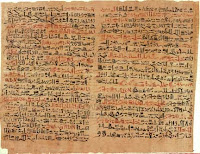 As far back as the third millennium BC the Eypgtians made a kind of crude paper from a reed called “papyrus”. They created flat sheets by hand and then pasted the long strips together the wound them round cylindrical rollers of either bone or wood to press them smooth enough to write on.
They enjoyed sharing the legends and stories and soon they found they had to stitch the papyrus together to keep the complete story together.
The demand for several copies of these stories created an industry of ‘replication’. Slaves were trained to copy the originals and their masters then sold these copies on to the public. You could say it was the beginning of publication as we know it today.
Parchment and velum followed. Both were less prone to disintegration than papyrus and became widely used from CE 800.

A courtier named Ts'ai-Lun, from Lei-yang in China, was the first recorded inventor of paper circa 105 A.D. The use of paper spread from China through the Islamic world and entered production in medieval Europe in the 13th century, where the first water-powered paper mills were built and mechanization of papermaking began. And so books we’d recognize today became accessible to the masses. 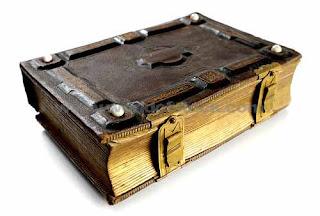 And so a widespread love-affair with reading began. Books! They became smaller and more manageable. Easier for people to carry around with them as they move from one place to another.

At each stage of change, I’m sure, there must have been those who decried the advancements. Not a lot has changed in the intervening centuries. Now it is the advent of the ereader that is causing a furor in the printing and publishing world. Many and loud were the voices proclaiming the downfall of the latest reading gadget. And now…? A new device is not only changing the way we read but it is rocking the old publishing establishments. It is changing our reading concept. It is smaller and contains not just one story but hundreds.

It is hard to conceive what could replace the ereader but someone out there will soon be thinking of how to improve the concept of sharing a story.