Miss Mae as M.M.
Yes, I’m not all seriousness. Sometimes I’m downright --well-- crazy! For proof, check out my “The Mishaps of Gum Drop Island”, both as ebook and print.

What happens in this attempt at children/humor/fantasy story?
Blurb:
Adventurer Sir O. Yuri Wiseguy-eh to the rescue! After convincing a lost damsel she must leave No place In Particular and come away to his Marshmallow Mansion on Gum Drop Island, (what is that crazy music that plays whenever those three words are spoken?), she enters the world of Yuri's confectionary plantation. His oddball staff, as varied in character as a box of assorted chocolates, adds their own flavor of delicious nuttiness. When Yuri realizes his newest arrival is cousin to Mort the Mothball Millionaire, the quest is on to sail to Moldy Corners. But why do those spooky, sharp beaked vultures watch from the fence railing? 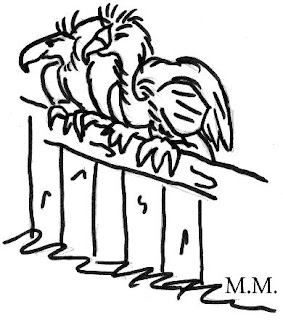 And how about a little excerpt?
You don’t even need to say “pretty please”!
The music trailed off and only then did Yuri pull his hands off his ears. He regained his feet. “Well.” Clearing his throat, he commented, “Seems as if we all heard different melodies. However, I beg you, don’t mention the name of this island. That music plays whenever those three words are spoken.”
“What three words?” Cuddles and Ms. Whales asked the question together, and then glared at each other.
“But no music ever sounded before,” Wrap told Yuri. “Why is it happening now?”
And with that, dear reader, the story turned back to me, and all I can say is, finally! After all, this is supposed to be my tale, not one about this island’s bizarre inhabitants. Right?
Yuri pointed at me. “It all began when I met her.”
“Her?” Moose swallowed the last of his caramel chew. “Why, she doesn’t even have a name.”
Yuri adjusted his monocle and looked at me. “That’s true. What is your name, de—” Catching the glances of both Cuddles and Ms. Whales, Yuri finished, “Girly?”
That’s when it struck me. I’d been left so long at No place in Particular without another person calling me names—uh, I mean, calling me by my own name—that I remembered I’d forgotten it. What was my name?
“Why, it’s—” I broke off. They all waited expectantly, even Heathcliff. Then he winked. Distracted by the action, I blurted out, “Oh, does it matter? The writer hasn’t bothered to give me a name just yet. I suppose in a later chapter I’ll have one.”
Yuri pursed his lips in thought. “You could be a victim of writer’s block.”
“Is that bad?” I gasped. It sounded like a dreaded disease.
“Is that good?” Moose countered. “We all have names. Heck, even the possum gets a name. But you, the main character, don’t have a name by now?” He shook his head. “Don’t need to be a blonde to figure that out.”
“Are you insinuating something, Mooch?” asked Cuddles.
“In any case,” spoke Yuri before Moose could reply, “let’s return to our duties. We have a confectionary plantation to run.” He clapped his hands. “Hip, hip. Hop to it, people. Look lively now.”
“I despise hopping,” muttered Wrap as he, none-the-less, obeyed and made like a rabbit. The others followed him single-file down the grassy path, although Moose more or less skipped as he shifted his hops from one foot to the other. I watched them and then noticed someone remained behind: Heathcliff.
For the first time, I addressed him. “Why are you in this story?”

And why is Heathcliff the possum relevant to this tale of a nameless damsel in distress? Could it be because of -- ? Or maybe it has to do with -- ? And quite possibly it just might be -- ? Well, hey, I’m not giving away the answers!

If you’ve not met my cyberspace reporter, I.B. Nosey, there’s also an interview with him included at the back of the print book. 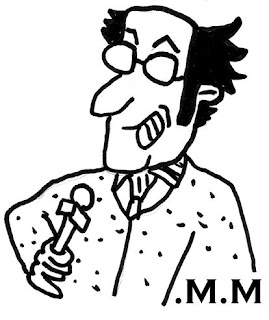 And can I leave you with a couple of reviews?
From Lynn:
We all know candy comes from the grocery store, but where does it come from in the beginning, Well no other place but Gumdrop Island, where its all grown. Fields of candy canes and lollipop trees and none other but a marshmallow mansion and rivers of pure milk chocolate. As we take an imaginary trip on the Good Ship [Sugar Daddy] and listen to the music as three little words are spoken—Gumdrop Island .As we meet some of the most amazing characters, like Capt. Bootleg and O Yuri Wiseguy ( or as I read it U r a Wiseguy) to Ms. Wales and Taz . and many other fascinating creatures. I could go on with more of but I do not want to give too much away and spoil the story line.

From Sharon Donovan:
The talented [M. M.] has spun a delightful tale guaranteed to tickle the fancy of children and adults alike. If you are a fan of this author like me, reading The Mishaps of Gumdrop Island will offer a glimpse into her fertile imagination. Remember those carefree days of youth before computer games? Before cell phones? Before technology turned everything into a whirlwind of downloading? What did kids do for fun? They used their imaginations to create fantasy worlds that could offer hours of fun and excitement all summer long.

Not only is The Mishaps of Gum Drop Island available in both print and ebook, but I also offer autographed copies if purchased straight from my website. And as an added bonus, you can own a Heathcliff the Possum doll. Who wouldn’t crave one of these little cuties to snuggle up to? 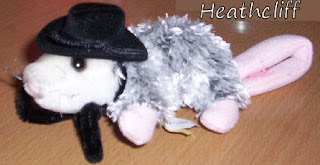 For more information,
visit http://mishapsofgumdropisland.webs.com/
Thank you very much Miss Mae for spending the last few days with us here at The Heart of Romance.
at 06:00

What a cute story. It sounds adorable.

Thx, Danielle. So glad you came over! :)

That is such a great story - fun and very unique! I think kids would adore this!

M.M. has created a delightfully, amusing story laced with suspense.

The eccentric characters all play a part in a tale that will pull you to a land where candy, including chocolate bars, grow from trees or bushes.

I laughed at the quick-witted retorts and sat on edge when the crew of Mishaps sail the sea to reach the spooky mansion.

That's all I'm saying. You must read this story.

Zee, Laurie, and Gail -- thank you so much for dropping by! I really appreciate it! :)

Miss Mae, Thank you for spending the last three days with us at The Heart of Romance, It's been great fun having you here. Like everyone one I love the sound of Gum Drop Island