The Wrong Target available in February 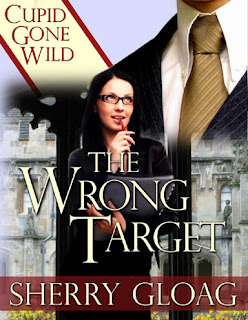 The Wrong Target ~
a short story a part of the
Cupid's Gone Wild anthology
released by eTreasures
in February.
Blurb:
Headmistress, Tina Blackberry, and business magnate, Ryan Thomas, can't control events after Ryan's daughter steals his coveted golden arrow and takes it to school, But put Cupid on the job and nothing can go wrong, or can it?

Excerpt:-
“You’ve got to admit, Tina, it’s a bit spooky.”
“Spooky?” Her wandering attention snared, she looked from the food choice in front of her to the man at her side. “What are you talking about?”
“The arrow! I mean, it’s not as if the head is embedded that deeply in the wood. If I didn’t know you better, I’d think you’d glued it in for a joke, but you’re not that sort of woman.”
The unintended insult slapped at her composure. On top of the day’s combined incidents, it nailed her morale to the floor.
“Not that sort of woman? What kind of woman do you think I am?” Casting a dark glance at her companion she snatched up the first sandwich in front of her and plonked it on her tray. “On second thought, Sam, I’m not interested.” She moved down the line, picked up the biggest plastic beaker and held it under the cola dispenser. Tonight the rights and wrongs of too much caffeine intake failed to concern her as she carried her tray toward the till.
“Got it out yet?” The cashier grinned while she stabbed a finger at the keyboard, waited for the cash drawer to open and handed over the change.
Had the news spread all over the school? Of course it had. She shook her head, too afraid to unleash her mounting temper on the unwary woman and strode over to the only vacant table in the room hoping Sam wouldn’t follow her.
Before she finished her drink, it occurred to her she’d neglected to arrange additional security for her office until someone released the arrow.
Tomorrow she’d look into the possibility of using a chain saw.
at 06:00

:-) Glad you enjoyed it Megan. Thanks for coming by.

Sherry, this excerpt is a wonderful example of your fine writing. I love the verbs you use and the mental pictures.

Caroline, I really appreciate your kind words, and am looking forward to your visit here.