#3 Thank you to everyone ho visited last week and to those joining us all on the second week of the great new Sweet Saturday Samples please enjoy.
While The Brat is rated 'sensual' and PG, there is no violence or 'explicit' sex in The Brat. There is some background reference, without details, to child abuse.
This scene in my debut novel The Brat published by The Wild Rose Press follows on from last week. 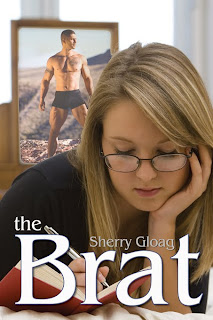 “Perhaps my mother… No.” He sighed. “Why would she keep any photos of me? And where would she get hold of one? Come on. Let’s see if we can find out. I imagine she’ll go back to the house.”

“She may.” The solicitor studied the handle of his briefcase while Ben released the car locks, then settled back against the supple leather of the passenger seat.

“Anything left in the cottage after the funeral automatically becomes part of your
mother’s estate. If she attends the funeral, she no longer has access to the property once she leaves the cemetery. If she hadn’t attended, the ban on access applied at the start of the service.”

Ben swept his gaze from the road to the man beside him and back again. “That’s a bit ostentatious, isn’t it, for a woman with nothing to leave? Why the unusual stipulation?”

"Mrs. Kouvaris was…” Obviously choosing his words with care, Cranborne continued, “a complex woman.” The words dropped into a silence and left much to the imagination.

“So my mother left nothing to the child she took in after sending me to my father’s home in Greece?”

He swallowed the taste of bitterness in his throat.

“And nothing to this Miss Williams who cared for her for the past five years?”

“Do you know the identity of the child my…”

Ben hesitated. “The name of the child she replaced me with—do you know her identity?”

“No.” The man shifted in his seat. “I don’t think Mrs. Kouvaris ever bothered to find out.”

Wow. The mystery gets deeper and deeper. What an unusual stipulation to a will. I sure want to find out what's going on! Great sample.

Hmmm...great mystery in your sample. Can't wait to read more.

Very nice sample. You've written in such a way that has me sympathetic with Ben and curious about the mystery behind his mother.

This is definitely getting more and more interesting.

Great emotion shown in Ben - and such a great mystery background! Thanks for posting this. :-)

Very interesting! Thank you for sharing.

:-) Jenna, thanks for your company.

Jennifer Lowery (Kamptner, good! LOL Thanks for your kind words.

Diane, I'm pleased you are sympathetic to Ben. He tries hard, and has so many revelations to deal with.

Lindsay, thanks for coming by, and your kind words.

Meg, I'm glad the emotion pleased you. Thanks for coming by.

Thanks for coming by, Rachel.