Scarlett Scott writes sexy historical and contemporary romances. She lives with her hero and their adorable but occasionally evil puppy.

First, thank you to Sherry for inviting Thornton, Cleo, and myself to drop in today. We’re very happy to be joining you.
Scarlett, I'm delighted to welcome all of you and am looking ofrward to your interview with Thorton and Cleo.


Scarlett: Thornton, what brought you to Lady Cosgrove’s country house party?
Thornton: My dragon of a mother insisted I go to support her efforts at matchmaking for my sister. The old bird has an incredible knack for producing guilt in her offspring.


Scarlett: Did you expect to see Cleo there?
Thornton: Of course not. I wasn’t aware she would be in attendance, or I dare say I would’ve skipped the affair altogether.


Scarlett: I understand there was an incident at the house party involving a broom closet and lavender perfume. Would you care to elaborate?
Thornton: Perhaps you’ve been on the receiving end of Lady Grimsby’s gossip? I’m fairly certain the chamber in question was not a broom closet. The rest, I’m afraid, I refuse to discuss.


Scarlett: How did you feel seeing Cleo for the first time in so many years?
Thornton: I believe the feeling was somewhat akin to being trounced by an omnibus.


Scarlett: Cleo, how did seeing Thornton again affect you?
Cleo: Given Thornton’s response, perhaps I should say I felt rather as if I’d been trounced by two omnibuses. *She smiles* But truly, when I first saw him I must admit I’d hoped he’d gained a paunch and lost a bit of hair. He hadn’t, the devil, and he was handsome as ever. I felt as if I’d gone back in time to when we were younger and carefree.


Scarlett: Speaking of the past, what can you tell us about your history with Thornton?
Cleo: He insulted my cat and ruined one of my best dresses, but of course I loved him. I was also very young and naïve, making some poor decisions I now regret.


Scarlett: Were you aware you were the center of the scandal brewing at Lady Cosgrove’s house party?
Cleo: The row Thornton had with Lord Ravenscroft certainly threw us onto the stage for all to watch. That was the moment I realized we’d caused more than a normal bit of fuss.


Scarlett: Your situation seemed very untenable after scandal broke. How were you able to make it through?
Thornton: We’re keeping our secrets.
Cleo *with a wink*: Well, perhaps not all of them… 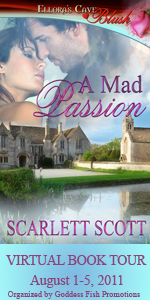 Seven years ago, the Marquis of Thornton broke Cleo’s heart. He’s the last man she wants to see at the country house party she’s attending with her sisters. However, fate has a different plan when she finds Thornton standing before her, as devastatingly handsome as ever. Thornton’s resolve is tempted by Cleo’s reappearance in his life. He’ll stop at nothing to have her back in his arms. Now a respected politician, he jeopardizes his career and reputation with each secret moment he spends with her. Together they must battle against ruin and swirling scandal to discover if their mad passion is worth the price.
Excerpt:
The floor creaked behind her. "This is an interesting place for an audience," drawled a deep voice laden with bad intentions and sinful promise.
She swirled around in her bath, flinging her arms over her chest and pulling her knees up. Thornton leaned in the open doorway, the soft light from her bedchamber glowing behind him so that he looked other worldly. Like a fallen angel come to tempt the wicked wife. How had she thought him a saint?
He was sin personified, wearing a white, un-tucked shirt with an improper amount of buttons open, a black jacket and no shoes. His bare feet drew her notice, strong and disturbingly attractive. It occurred to her she’d never in her life seen a man’s bare feet, neither Thornton’s nor John’s. It shocked her to think he had walked the hall sans shoes, in a state of half dress. And he’d entered her chamber. Had anyone seen him? Was he mad?
"What are you doing here?" she demanded, keeping her voice stern. It wouldn’t do to let her eyes slip to the enticing expanse of chest visible beneath his shirt’s gaping vee. Even if it was strongly muscled and lightly bronzed. Did he work out of doors without a shirt? How uncivilized, yet how thrilling.
Thornton continued to rest his hip against the doorjamb with the negligence of a conqueror. His gaze traveled to her bathwater and then back up to her face. "You sent me a letter."

A fun interview. I want to read A MAD PASSION.

Thanks, ladies. Good to see you again. :) Thanks to Sherry for having me here today! I'm happy to be back!

A fun interview! Definitely want to read this book.

Thanks for stopping in, Jean. :)

Great interviw!! I want to read a Mad Passion!!

I enjoyed the excerpt and look forward to reading the book.
I've added it to my TBR list.

Thanks for taking time to comment, Ruby and Andrea. If you get the chance to read it, I hope you like it!

Hi Daniela, thanks! Glad you liked it. This was the first time I ever "interviewed" my characters and it was tricky but fun.

Ah, I love character interviews! Always very funny and insightful. :) Thanks for the post!

love the cover, it is beautiful. and the excerpt was great. i can't wait to read the rest of the book and see what happens next.

Thanks for stopping in, Claudia and Tammy! Although all my covers are great, I am partial to this cover too, I have to admit.

I really like reunion stories and I like that some time (7 years) has passed between the hero and heroine. It makes me anticipate their reunion more.

I have to say I am a sucker for characters with a shared past. It's too tempting to resist. ;)

Love me some character interviews! This was a fun one! Looking forward to reading ya'lls book, Thornton and Cleo!-- Oh, and your's too, Scarlett.... ;-)

What a fun interview! Now I definitely have to read this book :)
jwitt33 at live dot com